View all posts by Nick Leech 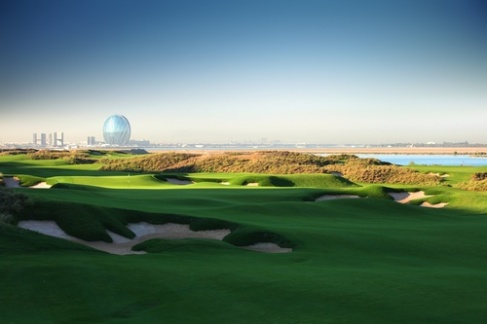 If you want expert advice about maintaining grass in the desert, few people can be more qualified than Mike Clarke, the superintendent of golf at Abu Dhabi’s Yas Links.

Grass is his medium, and he’s spent his working life playing on it, building with it and looking after it. Before Clarke took charge of the turf at Yas, he spent seven years as superintendent of Abu Dhabi Golf Club, and before that he developed courses in Switzerland, France and Pakistan. Now he is responsible for a team of 33 greenskeepers who start work at 4.00 every morning to get Yas Links in the kind of condition that got it voted into the world’s top 100 courses by Golf World magazine after only one year.

Cutting more than 40 hectares of playable turf every day and managing more than 4,000 computer-controlled irrigation emitters is no easy task, but many of the maintenance procedures employed at Yas are exactly the same as those needed in a domestic garden. The real differences are in standards and scale.

“Water is the main issue here. As long as you’ve got enough water, the warmer it is, the better it is, but when you’re growing new grass, you have to use at least one-and-a-half times as much water to get it established. We use six to eight litres a square metre per day in winter and somewhere between 12 and 16 litres per square metre in summer.”

Six to eight litres per square metre a day may not sound too horrific, but when you run the numbers the results are devastating, pushing the water consumption at Yas Links to around six and a half million litres of water per day, a figure that reflects local climatic conditions but also the fact that Yas uses a “warm-season” grass, Platinum TE Paspalum, that actually grows most during the hottest months of the year.

Irrigation demand isn’t the only water-related issue Clarke has to face. Although groundwater levels are plummeting in many parts of the UAE, the water table on Yas is very high, and brackish groundwater six to seven times more saline than seawater regularly rises to the surface, with potentially lethal results for the turf. Luckily, Paspalum grass grows naturally in maritime areas and is adapted to cope with salt. Irrigation helps to flush most of the super-saline groundwater away.

For Clarke, another benefit of using warm-season grass is the fact that all the most intensive maintenance can take place during the quietest time of the year, with minimal impact on the playing season and club members. “We have to be cruel to be kind. We really thin the grass out so it has room to grow, punch holes through it for aeration, scarify and verti-cut to get rid of the thatch layer.”

Verti-cutting is a form of vertical mowing that removes the thatch, a layer of dead stems and roots that forms between the surface of the soil and the greener blades of grass. “If this layer gets too thick, it will divert water and fertiliser away from the root zone.” Clarke insists that this also makes the removal of thatch one of the most important maintenance tasks for domestic lawn owners. “Even if you just work through your lawn with a rake or a fork [it helps]. Otherwise, the thatch layer will really give you problems.”

Thatch puts that familiar grassy spring in your step, but a lawn with too much of it will feel spongy. A thin (1cm) layer can be beneficial: it helps to prevent compaction of the soil underneath and, most importantly in the UAE, helps to shade and cool the growing crowns of the grass. However, thicker thatch causes problems by trapping moisture where it evaporates more quickly and encouraging roots to grow nearer the soil’s surface, sometimes in the thatch layer itself, which makes the whole lawn thirstier and more susceptible to drought.

Aeration and top dressing are as important for domestic lawns as they are for fairways and greens. Aeration removes small cores of soil to improve drainage and soil structure. Doing this also relieves compaction. Top dressing means spreading a layer of organic matter and sand over the turf, where it is allowed to dry before being brushed into the spaces created by aeration, giving air, water and fertiliser direct access to the root zone, where they are needed most. The top dressing mix can either match the existing base layer below your turf or include additives to help improve it. Clarke gives the greens at Yas Links a special mix that combines sands with different particle sizes.

“If you use particles that are too big, any nutrients or water you try and put on the grass will drain straight through. By mixing larger silica sand with finer red sand, our top dressing allows us to hold water and nutrients in the root zone where they’re needed most.”

For Clarke, success with a domestic lawn depends on the way the plot is prepared, the consistency of growing conditions and maintenance. The first step is getting the base layer and growing medium right. At Yas this is a 50-millimetre-thick layer of red sand and organic matter, but domestic lawns need only half that depth. “You see a lot of gardens where the builder’s rubble has been left in the yard and sprinkled with a thin layer of sand. People wonder why their grass won’t grow but the water has nowhere to go and there’s no space for a proper root zone.”

Keeping your grass well fed is also key, but just as there are good and bad foods for humans, so there are for lawns. Using old-fashioned granular feeds like sulphate of ammonia may provide an immediate “quick fix”, but as Clarke explains, it’s the horticultural equivalent of a sugar rush that produces weak growth that’s unable to sustain itself until the next feed. Modern liquid fertilisers may be more expensive initially, but they produce better growth and, because you use them little and often, they’re actually better value.

For a warm-season lawn, he says, fertilise three times a year: after the first two cuts in spring, in midsummer and then again towards the end of the growing season, around October. This last feed will prepare the lawn for winter.

During winter (and when the grass is dormant), top dress it with a mixture of silica sand, red sand and organic matter or compost. The compost doesn’t feed the lawn, but it helps to break the fertiliser down so that it can do its job more efficiently

Clarke also insists on automatic irrigation and regular checks to make sure your lawn is getting the water it needs rather than what your gardener thinks it does. “It’s an expense, but hand-held irrigation just doesn’t give you enough consistency. At least a couple of times a week you’ll also need a deep watering that will get down to the roots and encourage them to grow downwards.”

To work out how much water your lawn needs, leave the sprinkler on and see how long the water takes to travel down through your soil. During the heat of summer, you should also inspect your soil to see how quickly it dries out; this will tell you if you need to schedule a second watering each day.

The main problem with trying to grow grass in smaller domestic spaces is a lack of consistency in the growing environment. He says: “If areas of grass only see the sun for an hour in the morning, it’s very difficult to achieve consistency across the lawn. Parts of it will drain and grow differently, and there’s nothing you can do about that.”

At this point, Clarke makes a statement that I never expected to hear from a greenskeeper: “I’m actually a fan of the artificial grass for these spaces because it’s so realistic now. If you’ve got a tiny patch, why wouldn’t you use it?”

Invest in a sprinkler and deep water the lawn at least twice a week. To work out how much water your lawn needs, leave the sprinkler on and see how long it takes for the water takes to travel down to the vital root zone of your soil.

Strong, healthy growth can’t happen without this. Warm-season grasses should be fertilised about three times a year. Avoid granular formulas such as sulphate of ammonia. Liquid fertilisers will produce much better results.

Punching holes in the lawn’s surface improves drainage and soil structure and prevents compacting. Follow with top dressing (spreading with a layer of organic matter and sand) and brush it into the aeration holes. This will provide air, water and fertiliser to the root zone.

This layer of dead stems and roots forms between the surface and greener blades of grass. Cut or rake down to around one centimetre to avoid moisture being trapped and the lawn drying out.

A version of this article originally appeared in The National, Abu Dhabi