View all posts by Nick Leech

Students of Zayed University’s interior design programme trace their roots through a project that explores the relationship between traditional living patterns and the natural environment, learning lessons for their future careers.

Students from the Interior Design department of Zayed University walk into the compound, built by a craftsman from Sharjah.

It must be one of the UAE’s most enlightening vistas: from inside the palm-fringed walls of the traditional areesh housing compound that has been constructed in the grounds of Zayed University, the view of the tower blocks of Dubai’s Silicon Oasis is an incongruous sight.

It’s a schizophrenic image, but it has almost as much to say about the UAE’s architectural development as the young women gathered inside the compound, recent graduates and current students from the university’s interior design programme with strong opinions, grand designs, and a book to publish.

“The kind of buildings that are built here could be built in Tokyo, they could be in New York, they could be anywhere,” says Alya Busamnoh. “The idea of creating structures that are the suited to the local environment is what inspires us.”

Her colleague, Afnan Saeed Amin, is quick to agree. “The best architecture is about place. The smartest projects take the weather and the local culture into consideration. They don’t take ideas and projects from outside and just put them here.” Although they are not referring to the glass towers in the nearby Silicon Oasis directly, you get the impression that the architects responsible for them might wince if they were present.

Alya and Afnan are part of a group of students who recorded every aspect of the compound’s manufacture, from the harvesting of the palm fronds and their transformation into areesh in the date gardens of Al Dhaid in Sharjah and Wadi Madaiq, to its construction on the Zayed University campus in Dubai. 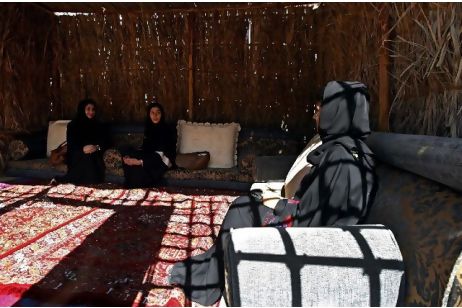 From the left, Alya Busamnoh, Azza Al Shamsi and Afnan Saeed Amin in a section of the compound made of palm fronds.

For Alya, the documentation process started out as a technical exercise in the use of materials and building technology, but soon morphed into an exploration of the complex relationships between traditional living patterns and the natural environment, what it means to be an Emirati, and just how this might manifest itself in contemporary architecture and design.

“We came to know that in the past people put more thought into the construction of houses than we do right now, and we came to realise that the use of techniques and materials like areesh define us just as much as the house itself.” For Afnan, the recording process also provided an invaluable opportunity to explore her own family history and her place within it. “It’s a project that has allowed us to appreciate our own history. For me the past was just about facts and dates. It wasn’t about people’s feelings, or how they lived, or how we got here.

“Normally it depends on your family and your grandparents if they tell you stories about the past or not, but now my father tells me stories about things I never thought he’d know. We really bonded on this project.”

For Professor Ronald Hawker, the art historian who designed the course that provided the academic context for the areesh project, the ability of students to guide their own research has even wider repercussions than the ability to overcome what he describes as the “discontinuity between generations”.

“It’s interesting to send students back to their own families as a legitimate form of research. It’s something that the students here are really good at and it also changes the whole process of teaching. It becomes a reciprocal learning situation and that’s very important because research is about gaining your own authority of knowledge. I’m no longer the only authority figure, and that’s an important step in the student’s transition to becoming professionals.”

For Hawker’s students, this transition has already started to express itself as they are now in the process of writing a book that will not only record the construction process in detail, but will also act as the first ever documentary record of a craft that sits at the very heart of traditional Emirati identity.

Alya explains. “We tried to research this but we did not find a single resource apart from word of mouth. We’re trying to document the process for future generations so they can also learn from it.” The publication has already attracted the interest of Zayed University Press and the Dubai Culture & Arts Authority, who originally assisted with the project by introducing Prof Hawker with the artisans who made and constructed the areesh. The university has plans to publish the book later this year.

The use of technology in student-directed research and the relationship between the past and contemporary practice are themes that build on Prof Hawker’s long-standing research interests. “There’s an intimate relationship between the building and the surrounding environment that had to be one of the keys to understanding how people used to live. Once you start talking about that relationship with the surrounding physical context, it opens up a whole set of ideas that a contemporary designer can use.”

Prof Hawker first came to Dubai 15 years ago as an expert in the art and design of the indigenous tribes of British Columbia on the Pacific coast of Canada, but soon started to see parallels between Canada and the UAE, not only in the relationship between material culture and the environment, but also in their experience of British colonialism.

“Both cultures are essentially maritime cultures supplemented by other things, and in both you see an economic and social reshaping that results from British imperialism. What is imperialism other than the safeguarding of strategic transport routes or commodities that feed the imperial industrial machine? In the UAE it was pearls while in Canada it was wood, canned salmon, and furs.”

It was not long after arriving in the UAE, that Prof Hawker was first introduced to a text that was to inform all of his subsequent research into the material culture of the Gulf region, John Gordon Lorimer’s Gazetteer of The Persian Gulf, Oman and Central Arabia.

The introduction came via Christian Velde, the resident archaeologist of the National Museum of Ras Al-Khaimah. Having never seen a copy of the Gazetteer in the flesh and tired of hearing references to Lorimer in conversation, Hawker asked if he could make a copy. “You can make a copy of the sections that are useful to you,” came Velde’s reply. It was only then that Prof Hawker realised that the Gazetteer ran to six-volumes and more than 5,000 pages.

The Gazetteer is a huge, rambling, patchwork of a document containing photographs, maps, histories, essays, genealogies, and bibliographies that describes a world that took shape in the 19th century and did not really change until the profound effects of the oil industry began to make themselves felt in the 1960s. As such, it is invaluable to a wide range of academics, researchers and everybody else who has a serious interest in the region.

For some time now, Prof Hawker has been mapping the contents of the Gazetteer as a layer on Google Earth and combining it with other historic texts, such as an 1822 British mapping survey of the wider Abu Dhabi embayment, to provide new insights into the social and economic life of tribes who inhabited the Gulf.

For Prof Hawker, some of the greatest insights come from the addition of the kind of data that only digital terrain mapping can provide. “I had no idea until I started mapping Lorimer out how environmentally driven population distribution was. When you start looking at the numbers he records, the economy between 1904 and 1907 was incredibly similar to the way it is today, it was a single resource export economy, but instead of being based on oil it was built of pearls.”

Prof Hawker is now working on a book that discusses the relationship between environment and society in the Gulf in more detail, but his mapping of Lorimer’s Gazetteer continues. The idea is to make it available to the public as a layer on Google Earth, one that can then be used as a tool in the classroom. For Hawker, the eventual value of this Herculean task is clear.

“If you’re dealing with the history of the UAE, you have to deal with Lorimer. His is the only single systematic accumulation of knowledge about the resources, economy, society, tribes, and political structure of the Gulf in one place and it gives as clear a description of the society here at the turn of the 20th century as anybody else has ever given us.”

This article originally appeared in The National, Abu Dhabi